Previous: The NASDAQ Glitch: What does it mean?
Next: The Basics of Value Investing
Investing, The Intern

Portfolio Wars: The Intern Strikes Back

It’s been a minute.  But don’t worry…The Intern is back!

I sat back and let my “boss” have the limelight for a couple weeks there. I gotta admit, his investment decisions were pretty sound. Albeit explained with a tad less wit than yours truly.

But wit can only take you so far. In the end, it’s stock performance that matters. And I’m losing in that category. Well, we both are. But I’m losing more.

After just over a month, my investments are down a total of 0.31%. But as I’ve said before and I’ll say it again, this ain’t no day trading league were running here. We’re in it for the long haul, and the investments I’m making are sure to get hit with market fluctuations. However, I believe these companies will prove their worth over the long term.

That being said, let’s quickly take a look at the markets current situation:

Well, pretty much everything has fallen over the last few weeks. See it seems we’re currently living in a “good news is bad news” time period, where strong economic data pushes stock prices lower. Why? It’s because of quantitative easing (QE), something I discussed at length in this here post. In short, it is the Fed’s Band Aid fix for our struggling economy. But as good data comes out, eluding to the fact that the economy is getting stronger, the fear of the Fed ripping its QE Band Aid off becomes more and more realistic. “Luckily”, some bad economic data came in this morning: there was a 7% drop in durable goods orders this month. With that, the S&P 500 and Dow Jones are up this morning. Yay?

This is market fluctuation at its finest…a perfect example of why I’m investing over the long term. It’s near impossible to predict where the market is going. But over the long term, well-managed companies with good products and economic moats are the ones that will pull ahead from the pact.

A little news on my current stock holdings:

P&G: After Proctor & Gamble announced their solid 4th Quarter earnings on August 1st (which I discussed with the utmost intelligence and sophistication in my latest blog post), the stock jumped up around $2. But as the month has progressed, it’s slowly but surely fallen back down to its pre-earnings price. Questions still linger around the company, which has struggled with growth in recent years. News came out that the returning CEO A. G. Lafley is currently living in a “temporary residence”, reinforcing the idea that he’s simply an interim solution. (Seems like Band-Aid fixes are in vogue these days…) On the flip side, P&G announced some good news in the form of a new partner: Habitat for Humanity. This partnership will lead to the construction and repair of homes in 12 countries around the world. Good on ya P&G!

YHOO: Yahoo has fallen 4.5% since I bought in last month. I did buy it near its 52-week high, so my small loss so far is not much of a surprise. But some good news has come through recently. Alibaba, the Chinese website that makes more in sales than eBay and Amazon combined, is currently in talks with the Hong Kong exchange, meaning an IPO could be coming up soon. Yahoo owns 24% of the company, which has a valuation of over $100 billion. Woah…

AFL: Aflac has also fallen with the market over the past month. But the insurance leader is showing huge growth in its Japanese division. They recently announced that the number of agencies its added in Japan this year will be 20% more than the number it added last year.

OK boys and girls, I think it’s time to add a new stock to my so far underwhelming portfolio. I’ve been deliberating over this one for a while, but I think I’ve done my due diligence. It’s time for action. Today, I’ll be investing in the voice technology company Nuance Communications.

Why Nuance, you say? 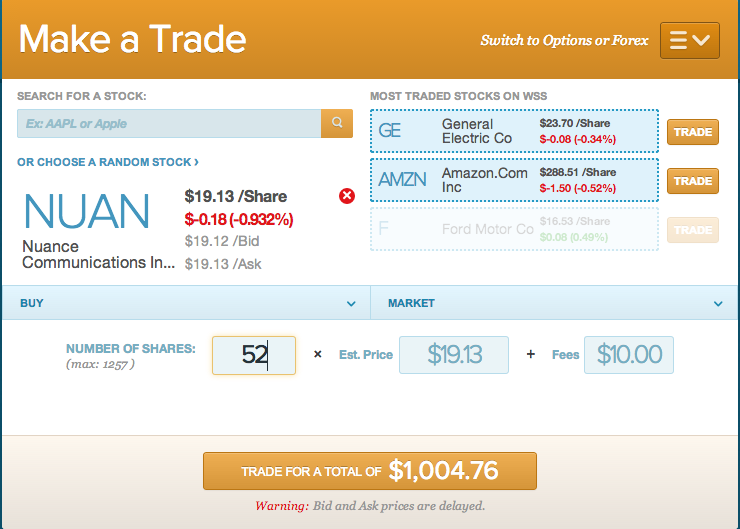 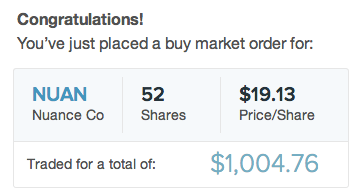 There it is! 52 shares of NUAN at $19.13/share. I now have 2 tech stocks in my 4-stock portfolio. Some may say that’s pretty heavily weighted in one industry. I say: “buy what you know”, and I know me some technology. J

For questions, comments, complements, or if you just feel like telling someone about your day, hit me up in the section below. Or email me.

To get fast and actionable investing information, sign up for Benzinga Pro and get real-time news alerts on the companies you care about.